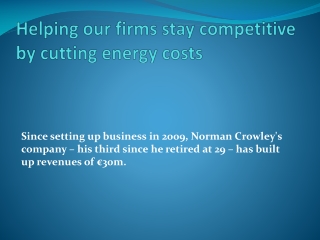 Since setting up business in 2009, Norman Crowley's company – his third since he retired at 29 – has built up revenues of €30m. CROWLEY Carbon is located in the magnificent Powerscourt House and Gardens in Enniskerry, Co Wicklow. Set up in 2009, by Norman Crowley, the company helps businesses and organisations reduce their energy usage. It's not Norman Crowley's first enterprise. In fact, this is the fourth business he has set up. He even made enough money from the sale of his first company to enable him to retire. That was when he was only 29. He later set up and sold a further two businesses before establishing Crowley Carbon. I am fascinated to learn what drives him, what special ingredient he has that seems to guarantee success in business and why he has chosen the energy-efficiency sector for his latest venture. "Crowley Carbon is a new type of energy-services company," Norman explains. "We have developed a new heating boiler system and building management software which, together, dramatically improves efficiency and can help reduce energy usage in buildings, by as much as 80 per cent." Norman explains that he has worked hard to assemble some of the brightest and most experienced staff in the industry. "Some of these guys are literally geniuses within the energy-reduction sector," Norman tells me proudly. Cutting Energy Costs in Restaurants - . how much are you spending on energy?. typical restaurant pays $3.13 per square

Competitive Firms and Markets - . price taking. a market is competitive if each firm in the market is a price taker : a

Firms in Competitive Markets - . chapter 14. outline. what is a competitive market? profit maximization and the