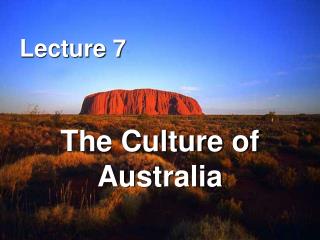 The Culture of Australia The Culture of Australia

About The Japanese Culture - The south-east asian culture, of which includes japan is a rapidly growing market for the

The Role of Immigration in the growth of religions In Australia - . religious expression in australia: 1945 - present. in

Australian Culture &amp; Customs - . welcome to australia these are just some of the customs and culture aspects of

MSA 515 GLOBAL CULTURE - . culture. capital raised in london in the eurodollar market by a belgium-based corporation may

Welcome to - . sydney, australia by: natalia ward. culture. sydney culture is diverse in nature . it is a blend of

Australia and Nature - . how does nature and climate influence australia and australian culture?. what is your image of