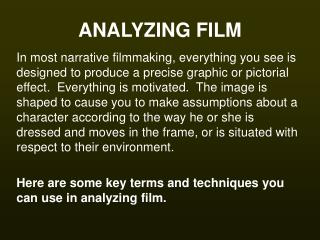 Analyzing Sound in Film - . sound effects. how movie sound effects are made . listen to this scene from a movie without

Analyzing Editing in Film and TV - . camera shot – single, continuous view taken by a camera, from the time the camera

Film - . a form of entertainment that enacts a story by a sequence of images giving the illusion of continuous

FILM: - . digital actor simulations, characters and animations. film is…. a series of images projected on screen in a

Film. - Will rogers. film. photo by will rogers. always been fascinated by film good conversation. why movies?. have an