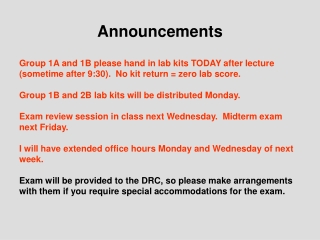 Announcements. Group 1A and 1B please hand in lab kits TODAY after lecture (sometime after 9:30). No kit return = zero lab score. Group 1B and 2B lab kits will be distributed Monday. Exam review session in class next Wednesday. Midterm exam next Friday.