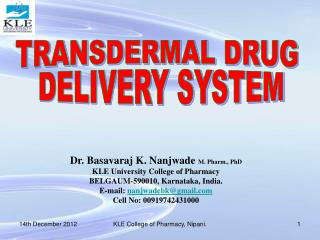 The Role of the School Psychologist in an RtI-Based Delivery System: Ensuring Successful Outcomes for ALL Children and

DRUG QUALITY SYSTEM FOR THE 21 ST CENTURY PQRI/FDA April 22-24 - . changes without prior approval an fda perspective

DIFFUSION STUDIES IN TANSDERMAL DRUG DELIVERY SYSTEM - . diffusion. movement of molecules from an area of high