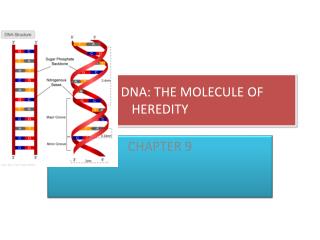 DNA: THE MOLECULE OF HEREDITY. CHAPTER 9. Big Idea. The Big Idea! The structure of DNA, the molecule of heredity, enables the molecule to copy itself. Enduring Understanding. Students will understand that: CHAPTER 11 DNA and Its Role in Heredity - . the structure of dna. in the 1950 ’ s many researchers were trying to

Chapter 11 DNA and Genes - . section 1 dna: the molecule of heredity. what is dna?. dna is a molecule that determines an