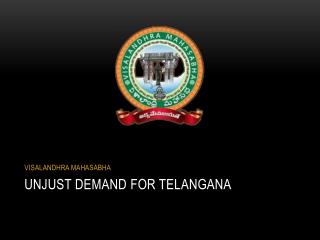 VISALANDHRA MAHASABHA. Unjust demand for telangana. About US. Visalandhra Mahasabha (VMS) is formed by a dedicated group of people from all walks of life and all regions of the State. We consider it our sacred duty to preserve the unity of our State. Rurbanization in Telangana - As per census of india statistics, the rural population in india, stands at 833 million,

Theories of Obedience to Unjust Authority - . nazis were an aberration in history shirer: flaw in german character

GOVERNMENT OF TELANGANA - . commissioner and director of municipal administration department. guidelines for

Telangana New Districts - Names with brief information is available at :

Telangana govt jobs - All the telangana govt. jobs are miss up by issue this tspsc recruitment notification.

Get Independent Houses for sale in Telangana - It’s known fact to everyone that,independent houses stands number one

Tensile Structure In Telangana - Fabstructure is one of the indian market leaders in high quality tensile structure,