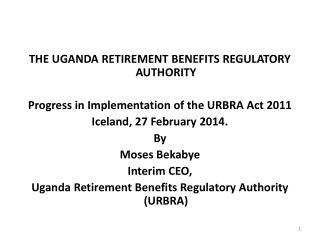 The Future of the Capital Market in Kenya - By: kibuga kariithi chief executive nairobi stock exchange kenya institute of

The Road To Regulation in Uganda - . presented to the 4 th afraca microfincnce forum by d.l.kalyango/nbfi. uganda’s

TRANSPARENCY INTERNATIONAL UGANDA - . tiu strategy 2012 - 2016. “ improving the quality of life of ugandans through

NSSF - . to be, or not to be?. an analysis of the clear case for nssf’s continued role in securing the social security

INSTITUTE OF CORPORATE GOVERNANCE OF UGANDA - . the board, board committees and human resource management presented to