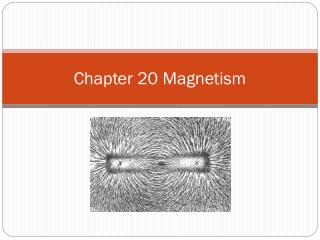 Chapter 20 Magnetism. Magnets. The ends of a bar magnet are called poles Like poles repel and unlike poles attract Regardless of their shape, all magnets have a north and south pole. Magnetic Fields . Magnetic Field lines point from the north pole to the south pole of the magnet Outline Chapter 6a Electricity and Magnetism - . 6-1. positive and negative charge 6-2. what is charge? 6-3. coulomb’s

Chapter 29 - . magnetic fields. introduction. knowledge of magnetism and application dates back to 13 th century bce in

Today: Chapter 24 : Magnetism - . please pick up your second midterm from the front of the class if you haven’t

Magnetism - . magnetism. magnetism is a force of attraction or replusion that acts at a distance . it is due to a

Magnetism - . atom -smallest particle of matter that retains all its properties. magnetism – field force caused by

Electricity and Magnetism Chapter 13 - . lesson 1 how does matter become charged?. what is matter? matter is anything

Magnetism - . section 8.1. magnetism. magnetism- the properties and interactions of magnets interaction between two