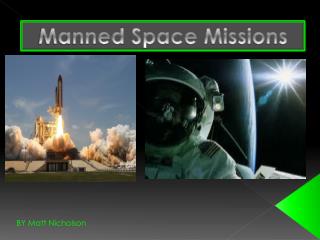 Manned Space Missions. BY Matt Nicholson. Why We Need Them. Gaganyaan mission: In a first, India to send humans into space for 7 days - On business standard. the total programme is

The History of Space Exploration - . the first living things in space. were fruit flies. in 1946, they were sent to high

Space Exploration - . a space community. if you could take a space trip, where would you go? what would you see? what

THE FUTURE PLANS OF NASA FOR HUMAN SPACE FLIGHT; MISSIONS, LAUNCH VEHICLES - . why

Manned vs. Un-Manned Space Exploration - . by: baseball swag. objectives. the class will learn the history of manned

Space Shuttle Program - . the space shuttle program was officially launched in 1981. it was started by the national

Manned Space Missions! - . is it really worth it ? by: hazel eklund. yes! manned space missions are definitely needed.

Pictures of the year: Space - Pictures of space. picture showing characteristics of