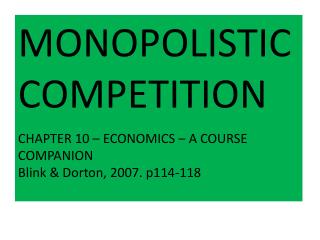 Oligopoly and Monopolistic Competition - . what you will learn. oligopoly. monopolistic competition. take this challenge.

Economics of the Firm - . strategic pricing techniques. recall that there is an entire spectrum of market structures.

Introduction to Production and Resource Use - . chapter 6. topics of discussion. conditions of perfect competition