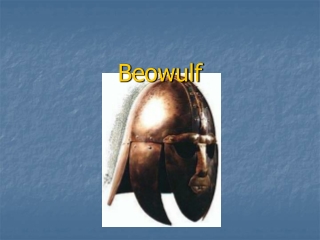 Beowulf. Textual Background. Composed around 700 A.D. The story had been in circulation as an oral narrative for many years before it was written. The action of the poem takes place around 500 A.D. BEOWULF - . first epic of england. what is it?. anglo-saxon literature (starting in 449 a.d.) takes on two typical forms:

Beowulf - . the king and his thanes. learning objectives. analyze cultural, historical, and contemporary contexts and

Beowulf - . day 5. standards. objectives. students will be able to… compare and contrast identify and utilize read and

Beowulf - . what is the purpose of the prologue?. gives us background info grabs attention describes the past that is

Beowulf - . the basics. who? what? when? where? why?. by whom?. by whom was it written? most anglo-saxon poetry was oral

BEOWULF - It dates to 1000 a d. beowulf. he is a hero, a person who has got values like honour, courage and survival. it

beowulf - . poem of a hero. timeline of england. 449 is the traditional date of anglo-saxon invasion 597 christian

Beowulf - . parts 4 through 7. part 4 – the arrival of the hero. beowulf, the hero of the epic, arrives to aid hrothgar

Beowulf - . significance and theme. theme of beowulf. theme: the central idea or insight of a work of literature; the