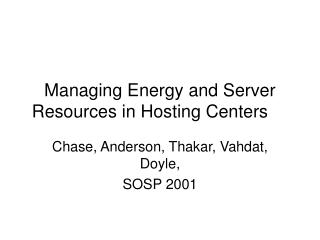 ENERGY RESOURCES - . notes and video clips for- energy: powering our nation. most of the earth's energy comes from the

Non-renewable Energy Resources - . chapter 16. essential question #1. what types of energy resources exist, and to what

Cloud Computing - . may 2010. author. a bad book is as much of a labor to write as a good one; it come as sincerely from