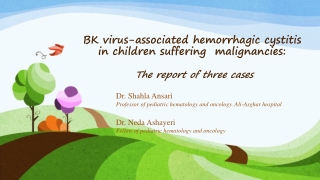 Dr. Ali-Asghar Aghbar - . serving the composition and tesol students at indiana university of pennsylvania by ryan

Hematology and Oncology - . little old lady in no acute

Hematology/Oncology - . brought to you by: group 7. what is not a likely clinical manifestation of leukemia?. petechiae