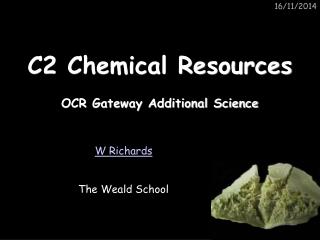 C2 Chemical Resources. OCR Gateway Additional Science. W Richards The Weald School. Fundamental Concepts. Chemical formulae. Na. Cl. K. I. O. O. O. The chemical formulae of a molecule or compound is simply a way of showing the ratio of atoms in it. For example….

C2: Logarithms - . learning objective: to be able to write an expression in logarithmic form. logarithmic functions are

C2- landform - . ms. leung. focus. we have been looking at how things change the earth. from inside the earth (the

C2 Contents - How to operate t his powerpoint select slideshow and click on “from beginning”. click once and this box

C2 Coordinate geometry - Coord geometry. from two points. . . . plot two points a and b on an x-y plane. what is the