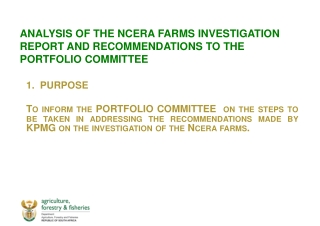 ANALYSIS OF THE NCERA FARMS INVESTIGATION REPORT AND RECOMMENDATIONS TO THE PORTFOLIO COMMITTEE. PURPOSE To inform the PORTFOLIO COMMITTEE on the steps to be taken in addressing the recommendations made by KPMG on the investigation of the Ncera farms. BACKROUND. Portfolio Analysis and Theory - . portfolio analysis. definitions. a portfolio is the collection of securities an

Guide to Portfolio - . task analysis . analysis of the task is an opportunity to consider a wide range of factors that

Final Report and Recommendations of the Committee on Affordability - . co-chairmen: robert english and j. robert barr.

Purpose of Presentation Background Briefings to the Portfolio Committee - Consultation with salga, unions and

Presentation to Portfolio Committee on Minerals and Energy - . the south african diamond producerâ€™s

PRESENTATION TO THE PORTFOLIO COMMITTEE - . progress report by the department of agriculture, forestry and fisheries