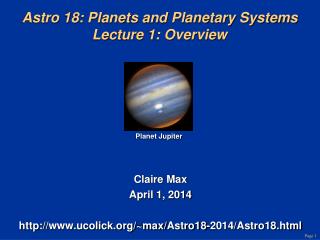 Chapter 6 Formation of Planetary Systems Our Solar System and Beyond - . the solar system exhibits clear patterns of

CMPE-013/L Computer Systems and “C” Programming - . gabriel hugh elkaim spring 2012. about: me. faculty at ucsc since