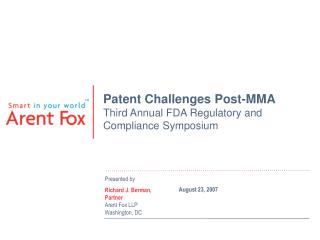 The Third Annual Regulatory and Compliance Symposium Managing Risks – From Pipeline to Patient - . meeting the goals of

THE FDA REGULATORY AND COMPLIANCE SYMPOSIUM Managing Risks – From Pipeline to Patient - . presented by: steven a.

The Cost of Non-Compliance: Regulatory and Enforcement Challenges - Compliance, cost, and competency in america namepa

PHARMACEUTICAL AND REGULATORY COMPLIANCE CONGRESS - . november 2002. insights into the department of justice. the views

Regulatory Compliance and You - . who put all these regulations on me? what is a person to do? where do i go from here?