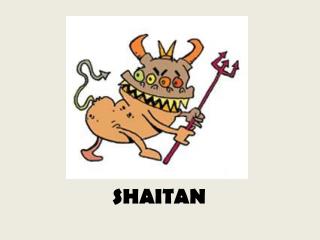 SHAITAN. A humble attempt to find an answer to the for ever perplexing question – WHY DID GOD HAVE TO CREATE SATAN ? WILL NOT THE WORLD BE A BETTER PLACE WITHOUT THIS DEVIL ?

I seek protection of ALLAH against the rejected Shaitan - I seek refugee in allah against the accused shaitan. most of

Ramadan - . by batool anwar. what is ramadan?. ramadan is the ninth month of the islamic calendar. in this month muslims

Etiquettes of eating and drinking: - . what to do:. what not to do:. eat and drink while sitting. saying bismillah before

Images of the Devil - . childhood’s end. satan (meaning accuser ) is a term that originates from the abrahamic