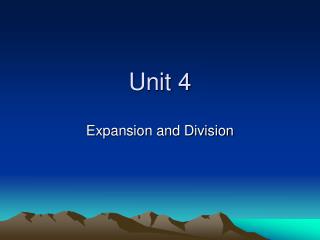 Unit 4 . Expansion and Division . Start Up. What is the most important Invention of all time? . Vocabulary . Industrial Revolution- social and economic reorganization that took place as machines replaced hand tools and large-scale factory production developed

Unit 4 Pygmalion - . grammar. the revision of the -ed form. objectives. at the end of the lesson, you will be able to ●

Unit 4: Nature’s Fury - . unit 4: nature’s fury. essential question (copy on a new page in your notebook) what are

Unit 4 - . mythology – part 4. “cupid and psyche”. why is venus angry with psyche? how does zephryus help psyche?

UNIT 4 - . amendments. 11 through 27. mr langhorst. 11th amendment. explains what must happen for a citizen of one state