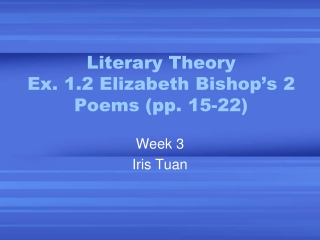 KNOW BEFORE YOU GO - . welcome to nashville!. bishop gregory g.m. ingram chairperson of the general conference

Elizabeth Bishop - . distinct, and difficult to define. main themes. in ‘the fish’, ‘filling station’, ‘the

“One Art” By Elizabeth Bishop - . brandon arvon . background on bishop. born february 8, 1911 father past away of

Intro to Literary Theory - . cher schwartz. what is literary theory/criticism/lens?. interpretive tools that help us

Parody Poems - . parody. a literary or artistic work that imitates the characteristic style of an author or a work for

Literary Theory: An Introduction - Journeying through textual possibilities in eng 4u1. literary theory: an introduction.