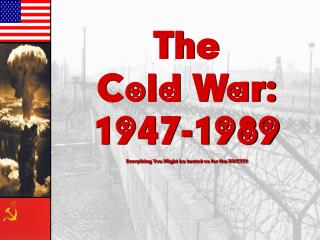 The Cold War: 1947-1989 Everything You Might be tested on for the EOCT!!!! - PowerPoint PPT Presentation The Cold War: 1947-1989 Everything You Might be tested on for the EOCT!!!!. Post-War Germany. After WWII the Allied nations divided Germany and Berlin East Berliners fled west to escape communism Immediately soviets surrounded ALL of Berlin 1961 – build physical wall around the East half.

Independence Act of 1947 - . independence act. on july4, 1947, the viceroy announced the partition plan on radio.

REVIEWING FOR THE U.S. HISTORY EOCT - . from john adams through reconstruction. presidency of john