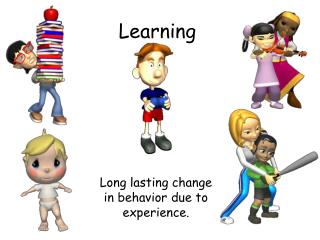 Learning. Long lasting change in behavior due to experience. Classical Conditioning. Ivan Pavlov Studied Digestion of Dogs. Dogs would salivate before they were given food (triggered by sounds, lights etc…) Dogs must have LEARNED to salivate. Click above to see about Pavlov.