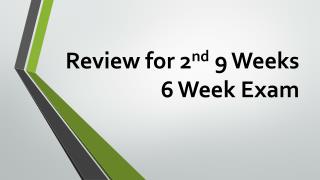 AP PSYCHOLOGY Review for the AP Exam Chapter 1-4 - . success on the ap psychology exam. knowledge need to know the

Economics Week 7 - . this week , exports and imports ( macroeconomics ) week 8 – review of all material covered by mr.