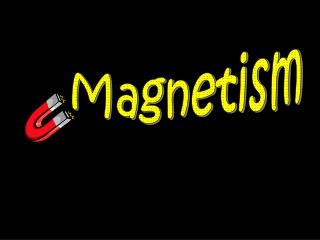 Magnetism. Magnetic field – Region where a magnetic influence (force) can be felt. Lines are drawn to represent the strength and direction of the field. Field is represented from N to S. Magnetic Forces. Magnetism - . magnets. what do we already know ?. what are we going to learn today?. understand that some materials are

Magnetism - . melissa nancy emily. is the attraction of one object for another object. magnetism. material that shows

Magnetism - . strange stones. a young shepard named magnes discovered magnetism when iron nails of his sandal stuck to a

Magnetism - . force of attraction or repulsion of a magnetic material due to the arrangement of its atoms. properties of

Magnetism - . what is magnetism?. force of attraction or repulsion due to electron arrangement magnetic forces are the

Magnetism - - Lodestone (also spelled loadstone) is a special type of the mineral magnetite. all varieties of magnetite

Magnetism - . gly 4200 fall, 2012. early observations of magnetism. ancient greeks, especially those near the city of

Magnetism - . 4th grade science. what is a magnet?. any object with magnetic force. magnetic poles. the parts of a