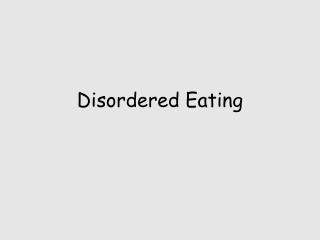 Eating Disorders In Athletes - . or do we mean disordered

I AM - Comenius project. i am. what i eat. Școala gimnazialĂ nr 5 arad. 75% of today's diseases are caused by unhealthy

What every Resource Officer needs to know about students with disabilities - . emotionally disturbed. conduct disordered