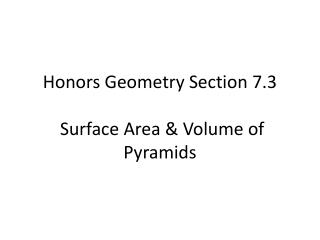 Surface Areas of Pyramids and Cones - 1. find the slant height of a square pyramid with base edges 12 cm and altitude 8

Volume and Lateral Surface of a Cone - . page 547. volume of a cone. lateral surface area (area of a

Geometry Surface Area of Pyramids and Cones - . warm up. find the surface area of each right prism or right cylinder.

Geometry Volume of Pyramids and Cones - . warm up. find the unknown numbers. the difference of two numbers is 24. the

Section 9.4 Volume and Surface Area - . what you will learn. volume surface area. volume. volume is the measure of the

Volumes of Prisms and Surface Area - . #31. vocabulary. volume is the number of cubic units needed to fill a space. v =

Honors geometry 1-3 - . quick quiz. classify each statement as true or false all points on a line are coplanar. a line

Surface area and volume of 3-dimensional Figures - . cuboid a cuboid has 6 faces. front. top. right side. front. back.