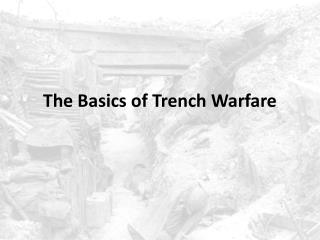 The Basics of Trench Warfare The Basics of Trench Warfare. What is Trench Warfare?. Trench Warfare is a form of defensive warfare The opposing sides have ‘dug in’ and are well protected and supplied In addition, supply lines could usually be stretched without difficulty into controlled territory

The Basics of Trench Warfare

World War I - . trench warfare &amp; weapons. &quot;the great war was without precedent ... never had so many

TRENCH OPERATIONS - . for safety is not a gadget but a state of mind.  ~eleanor everet. objectives . governing standards

Using the source, what opinions can you form about trench w arfare? - From this source i can tell that trench warfare

Context - . why wasn’t it ‘over by christmas…’?. developments in technology and modern warfare one million

Trench warfare - . wwi was the first time that “trench warfare” was used extensively in battle. after the battle of

Trench Awareness Training - . for safety is not a gadget but a state of mind.  ~ eleanor everet. objectives . governing

Gas Warfare - . by: nelam bidja cristina mozumdar sarah gonzalez. what is gas warfare and how is it used?. a chemical

Opening Task - . read the poem “the man he killed” compare the message in the poem to the messages you discovered in

Trench Warfare - . world war i can only be described as a senseless war, it was unlike any war fought before or since. on

The Rush to Enlist Crashes into the Reality of Trench Warfare - . from excitement to despair. the excitement of war!.

Why Didn’t Trench Warfare Work? - . in today’s lesson we are going to: learn the failings of trench warfare through

Trench Warfare - . disasters and diseases. http://www.firstworldwar.com/features/trenchlife.htm. how to build them.