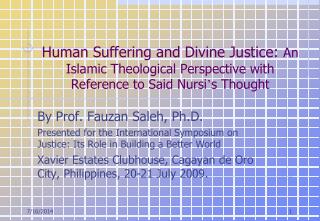 Human Suffering and Divine Justice: An Islamic Theological Perspective with Reference to Said Nursi ’ s Thought. By Prof. Fauzan Saleh, Ph.D. Presented for the International Symposium on Justice: Its Role in Building a Better World

Frege and Wittgenstein on Sense, Reference and Thought - . reading frege’s “on sense and reference” and “the

Volunteers from university students for a day serve the conference to receive about 250 guests - . greeting each other