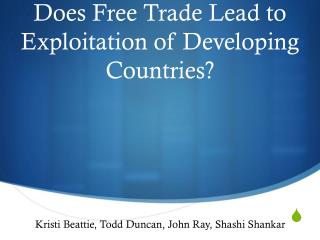 Famous economists and their contributions

International Trade - . who gains and who loses from free trade among countries?. what determines whether a country

Economics Unit 2 - . notes. trade. a tariff is a tax on imported goods. free trade refers to convincing countries not to

Economics - International trade why trade?. economics . why do countries trade?. there will be much discussion of the

What is trade? - . where does everything come from? can children in developing countries pop down to a dairy and buy a

The implications of trade-distorting and decoupled farm support in OECD for developing countries - . ekaterina krivonos

Benefits of Free Enterprise - . objective: what are the basic principles of the u.s. free enterprise system? what role