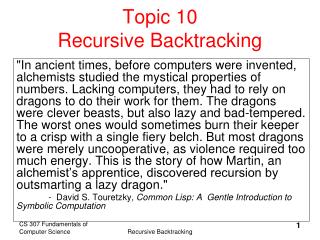 Chapter 17 Recursion - . chapter scope. the concept of recursion recursive methods infinite recursion when to use (and

Measuring Efficiency Problem: Towers of Hanoi - . three towers move all disks from one tower to another only move one at

Divide and Conquer (Merge Sort) - . divide and conquer. recursive in structure divide the problem into sub-problems that

Recursion - 15. recursion. it's a poor sort of memory that only works backwards. — lewis carroll , alice in wonderland

Backtracking - . a short list of categories. algorithm types we will consider include: simple recursive algorithms