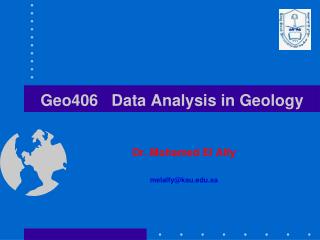 Geo406 Data Analysis in Geology. Dr. Mohamed El Alfy melalfy@ksu.edu.sa. A simple definition Statistics: “ The determination of the probable from the possible”. What is “statistical analysis ”?. This term refers to a wide range of techniques to. . . 1. (Describe) 2. Explore Data analysis in MATLAB - . christian ruff. why use matlab to analyse data?. one single programme can be used for:

Data Analysis in Excel - . importance of data analysis. tracking and analyzing data are increasingly important in

Data analysis services - Professional Data Analysis Companies In India - Hire data analytics from us. we are among

Geology - . justin p. jones. the world is a canvas. a geologist examines the many stories told by the earth’s rocks and

Geology - . sol 5.7. geology 1. what is weathering?. answer. the gradual wearing away of rock by the forces of wind,

Geology - . an overview of plate tectonics. disturbing forces. deformation of rock involves changes in the shape