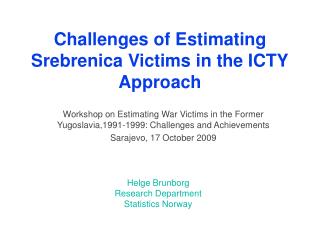 Courtesy of ICTY - . photo caption and credit. ligature used to bind someone’s hands in srebrenica, unearthed during an

Remembering Srebrenica - Abandoned by their u.n. protectors toward the end of a 1992-95 war, 8,000 muslim men and boys

International Law and the ICTY - . by andrew strong. introduction. the law as it currently exists the problem: all

Victims Rights and the Standing of victims in criminal procedures - . focus in judicial cooperation lies traditionally on

THE VICTIMS - . by sharon olds (from suzanne choo’s unseen poetry and prose , p. 56). attitude of the children in the

Statistical and practical challenges in estimating flows in rivers - . from discharge measurements to hydrological