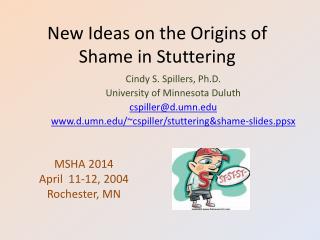 New Ideas on the Origins of Shame in Stuttering New Ideas on the Origins of Shame in Stuttering

Origins of a New Nation - . describe the origins, purposes and limitations of government and include the contribution of

Stuttering - . stuttering. it is a speech/language impairment also noted as a communication disorder that can adversely

Stuttering - . by david lynn. definition . stuttering (also known as stammering) is a communication disorder in which the

The Shame of the Nation - . jonathon kozol. kozol believes that schools are segregated, do you think that it’s true?.

Stuttering - By: courtney chilcoat. stuttering. speech disorder in which sounds, syllables or words are repeated or last

Reconstruction and the Origins of the New South

Breaking the Bondage of Shame

Stuttering - . by: stephanie boggs. about stuttering. 1% of the world stutters. it’s ok to stutter. what happens to me