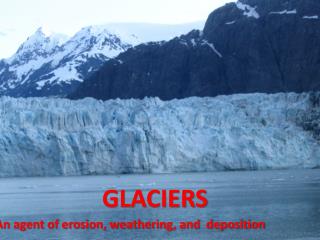 GLACIERS An agent of erosion, weathering, and deposition GLACIERS An agent of erosion, weathering, and deposition. What are glaciers ?. Glaciers are large masses of moving ice and snow on land They are found in areas where there is a lot of snowfall that doesn’t melt from winter to winter

GLACIERS An agent of erosion, weathering, and deposition

Weathering and Soil Formation - . weathering. the breaking down of rocks and other materials on the earth’s surface is