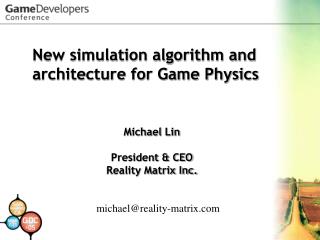 New simulation algorithm and architecture for Game Physics. Michael Lin President & CEO Reality Matrix Inc. michael@reality-matrix.com. What we will be going through?. Algorithm Combine the rigid-body and deformable body dynamics all together. Parallel able and distributable algorithm a game loop architecture for the modeling and simulation of mission threads - Outline. objective to promote the viability

Game Architecture - . rabin is a good overview of everything to do with games a lot of these slides come from the 1 st

Game Physics - . what is meant by physics in games (old)? collision detection (testing) but want the physical effect