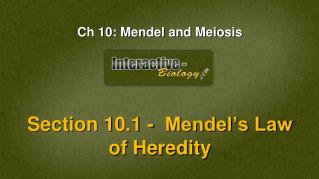 Mendel and Heredity - . chapter 10 and 12. key terms. heredity – the passing of traits from parents to offspring

Cell Division and Genetics - . chapters: 12-15. why do we need cell division?. 2 reasons: growth and maintenance

GENETICS - . drill: april 29, 2011. what is a gene? an allele? define and differentiate between a true/pure-breed and a

Gregor Mendel - . mendelian genetics explains the principles of heredity. why pea plants???. have easy to identify

Meiosis - . objectives: i can: • explain the difference between mitosis and meiosis. • describe how chromosomes

Section 8-3 Meiosis - . the purpose of meiosis. meiosis is a type of cell division that takes place in gamete cells that