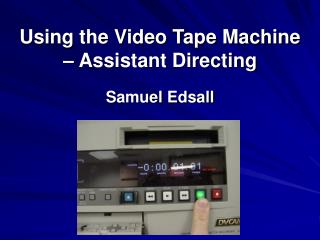 Using the Video Tape Machine – Assistant Directing. Samuel Edsall. Our VTR’s. We have two types of DVCAM VTR’s, but they essentially work the same way VTR’s 1 and 2 use an external controller for jogging and shuttling while VTR 3 is its controller built in. Assistant Director. Abstract - 2. 1. determination of caffeic acid and gallic acid in algerian bee pollen by an hplc method. a. rebiai , t.

Archiving Legacy Composite Recordings Made On Component VTRs - The problem. most broadcasters assume that the best way to