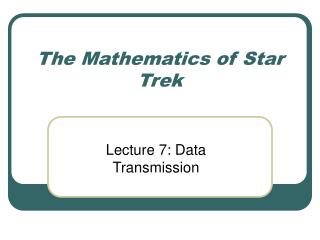 The Mathematics of Star Trek

The Mathematics of Star Trek

Star Trek: The Next Generation - . how to outthink and outgrow religion, star trek style…. tng vs classic trek themes.

By Natasha Darbisi - Volcanoes. by natasha darbisi. what’s a volcano?. a volcano is a mountain formed by volcanic

Natasha Gandham - What are confabuloators ’ memories made of? a study of subjective and objective measures of

Everything I Need To Know About Life I Learned From Star Trek - . seek out new life and new civilizations.

The Mathematics of Star Trek - . lecture 2a: red shirt survivability. red shirts in star trek tos. two terms that have

D4 - Antiderivatives - . ib math hl/sl. (a) review. to date, what we have presented are differentiation techniques (power