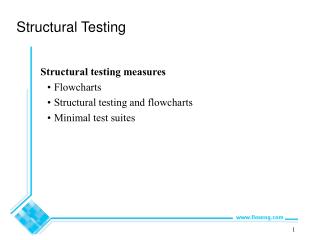 Types of Software Testing - Software testing is a process that should be done during the development process. in other

Software testing - . objectives. to discuss the distinctions between validation testing and defect testing to describe

Data Flow Testing - . data flow testing(dft ) is not directly related to the design diagrams of data-flow-diagrams(dfd).

Testing the Strength of Structural Members - . learning objectives. calculate the cross-sectional area of a structural

How Can One Use Tools During Exploratory Testing? - Http://qatestlab.com/ exploratory testing is an underestimated