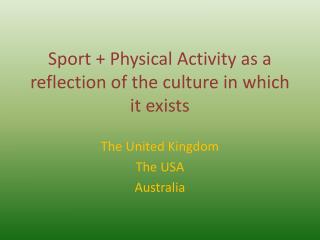 Sport + Physical Activity as a reflection of the culture in which it exists. The United Kingdom The USA Australia. 19 th Century public schools – background info. In society – in Victorian Britain there was a shift from rural to urban society, which gradually became more civilised

Historical Studies in Physical Education and Sport - . our times and our attitudes, our games and our sports are shaped TRAINING PRINCIPLES &amp; PERIODIZATION - . pep 201 university of idaho. there is a difference between physical