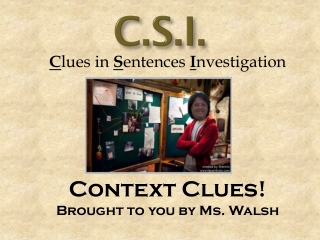 C.S.I. C lues in S entences I nvestigation Context Clues! Brought to you by Ms. Walsh. Guessing The Meaning Of An Unfamiliar Word…. Sometimes when we are reading, we don’t know what a word means! What do we do?