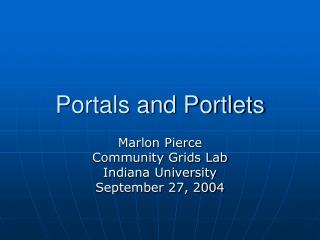 Portals and Portlets. Marlon Pierce Community Grids Lab Indiana University September 27, 2004. What a Science Portal Is/Is Not. It is A tool for aggregating and managing web content A user customizable view of these Web content pieces. You see what you want/can see. But you must log in. Publishing applications on the web via the Easa Portal and integrating the Sun Grid Engine - . by michael griffiths

Portals and EAI - . readings week 12. portals vs. eai. eai – links and stores information between applications (the