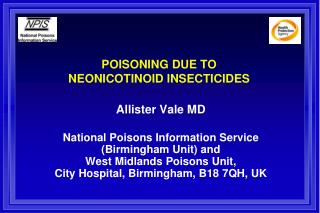 POISONING DUE TO NEONICOTINOID INSECTICIDES

POISONING DUE TO NEONICOTINOID INSECTICIDES

Organophosphate and Carbonate Poisoning - Pipeline Review, H1 2017: Aarkstore - The report provides an overview of the

Insecticides - . how do insecticides kill pests?. 1. stomach poison. this chemical is sprayed or dusted on the plant. it

Insecticides - . chemicals that are used to kill that are pests. 1st generation. mixtures containing. - lethal to both

ACCOMMODATION AT BIRMINGHAM CITY UNIVERSITY - . what we offer. the university owns or manages accommodation for over

Value of Neonicotinoid Insecticides In MS Cotton - . jeff gore – msu, drec, stoneville. what are neonicotinoids ?. a

Pesticides and Pollinators - . a look at modern neurotoxins. pollinator losses - not one thing. it’s global. total