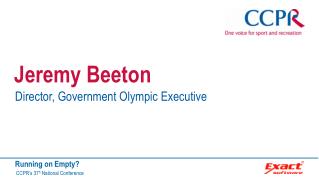 Jeremy Beeton Director, Government Olympic Executive Maximising the legacy of London 2012 6 May 2009 Build Phase On track and on budget 1/3 of ODA programme complete All major venues on or ahead of schedule Stadium (May 08 – 2.5 months early) Village (June 08)

5 ways your business should be maximising LinkedIn right now!

LONDON - . 1. london. the capital of the u.k london is the biggest city in britain and in europe it has a population of

The Rotary Club of Knoxville 96 th Year of Service Above Self - - A Legacy to Build On - . rotary good works. rotary year

Legacy technologies in corporate environments - . my background. experience since 1970 in informationtechnology.