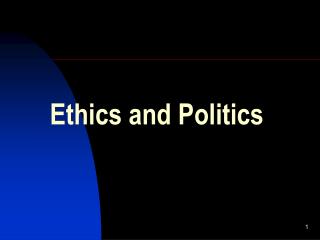 Ethics and Politics Politics is the process of making and implementing decisions binding upon society Politics is about accumulating and using power Ethics is a set of beliefs and customs shared by members of society with regard to: what is right and what is wrong

Ethical Power and Politics - 10. ethical power and politics. introduction (1 of 2). power is needed to reach objectives

Exploring Power and Ethics in Research - . what responsibilities do i have as a researcher?. power, politics, and

Political Science - . a systematic study of government and politics that examines the impact of religion, nationalism,

Research Ethics in the 21 st Century - . plus: the place of commitment, bias &amp; reflexivity in methodologies

How does morality intersect with politics? - . morality is more than harm and fairness (taste receptors). henrich ,

Defining Ethics - . “conforming to the standards of conduct of a given profession or group” agreements shared by

What do we mean by ‘ethics education’? - Becoming critical professional beings: the ethics and politics of student