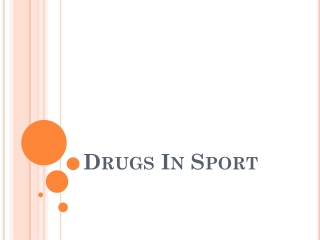 Drugs In Sport. What I Want You To Learn TODAY. Understand socially acceptable and unacceptable drugs Recognise banned performance enhancing drugs (SNAPD) Understand the performance effects of such drugs and the side effects. Starter Task.

DRUGS IN SPORT - . today’s athletes continue to push the boundaries of excellence in performance and physical fitness.

DRUGS IN SPORT - . drugs in sport. a drug is any chemical introduced to the body which affects how the body works. doping

3.4- Drugs in Sport - . why do performers take drugs? who is involved in the battle against drugs? what is done to deter

Drugs in Sport Section 1.2.1 - . why effects do both recreational and performance enhancing drugs have on performance?.