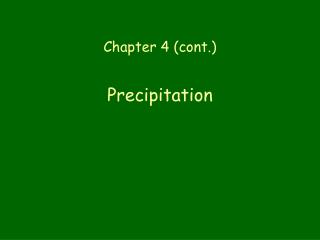 Chapter 4 (cont.). Precipitation. How does precipitation form? Why do some clouds generate precipitation and others do not? What factors determine the various types of precipitation?. To answer these questions, let’s start by examining the sizes of typical cloud and raindrops.

Honest Work: Chapter 4 (2 days) - What are the ethics of finance and accounting? we consider a variety of duties with

CHAPTER 4 - . developing a research plan. research questions &amp; hypotheses. first, decide whether you plan to use

Chapter 4 - . in the chapter, it reveals of three main philosophical positions in relations to research: positivism

Chapter 4 - . american life in the seventeenth century, 1607–1692. i. the unhealthy chesapeake. life in the american

Chapter 4 Loops - . to use while , do - while , and for loop statements to control the repetition of statements