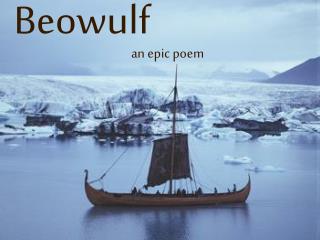 Beowulf. an epic poem. What is an epic or a saga?. A long story, often in the form of a poem Based on historic or legendary events Tells the exploits of a hero Characters & events are exaggerated and glorified. Beowulf as Literature. Earliest example of English poetry 3200 lines long

Beowulf - . the epic tale. definition of epic hero. an epic hero is the central figure in an epic that reflects the

Beowulf - . an epic tradition. why study beowulf?. 1. beowulf is the oldest poem in the english language, so everything

beowulf - . poem of a hero. timeline of england. 449 is the traditional date of anglo-saxon invasion 597 christian

Beowulf - Text and context. beowulf. beowulf. the old english language was mostly spoken, but it did have highly

Beowulf: Background Information - One of the most important remains of anglo-saxon literature is the epic poem beowulf.

Beowulf - . a hero for all time…. standards. objectives. students will be able to… identify what makes a person a

Beowulf - . poet unknown anglo-saxon and old english christian (but with a bit of pagan tradition) epic poem (with 3,182