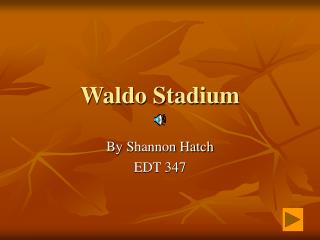 Waldo Stadium By Shannon Hatch EDT 347 “From Swamp to Swank” http://www.ur.wmich.edu/centennial/history_waldo-full.html President Dwight B. Waldo acquired the 14-acre parcel near Prospect Hill in 1913. Waldo launched the University’s first fund-raising campaign to help pay for the land.

Learning Objectives : - . use the bhatch command to hatch an area using various patterns. use boundary hatch with

DB-16: In Any Case, the Devil’s in the DataServer Details - . that which we persist in doing becomes easier, not that

Landscape Inspection Seminar - This 2006 revision was carried out under the direction of jeff caster, state